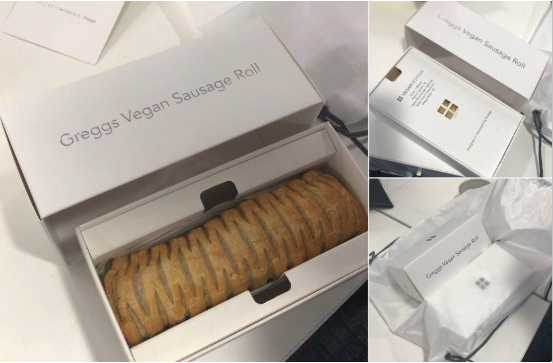 2019 is now here, and trending like crazy is #Veganuary (that’s Vee-GAN-uary). Launched in the UK in 2014, Veganuary is a charity to encourage people to try being Vegan for one month in January.  And it seems to be working, as 2019 seems to be the year of the Vegan, with the trend growing massively over the last year.

It’s really interesting that so many restaurant chains and eateries have jumped on the bandwagon. It only takes a quick google to see that 25 chains having introduced Vegan food into their menu, and then are promoting it across ‘the gram’ in January; we’ve vegan pizzas from Zizzi’s, Pizza Express and Pizza Hut, Burgers from Byron, Gourmet Burger and even Toby Carvery promoting their Vegan Sunday lunch, which made me smile!  So, it was no surprise to see that Gregg’s launched their Vegan Sausage roll on the 3rd January.

You have to commend them for their timing and their sense of humour of the brand.  I loved the PR piece that was sent to capture the journalists attention. It’s really lovely to see a brand that doesn’t take themselves too seriously, which Greggs have always been so good at. This brand personality also allowed them to respond to social media brilliantly over the launch period; we particularly love the one to Piers Morgan.

And has it paid off?  Well it looks that way, people queued, sausage rolls sold out, media buzz was huge and social media had over 1,700 positive mentions vs 962 negative according to Brandwatch.  Well done Greggs, you’re on a roll!